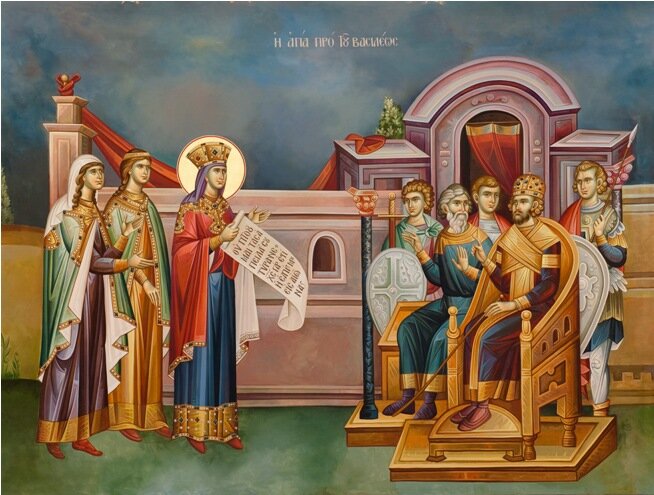 Saint Katherine, who was from Alexandria, was the daughter of Konstas. She was an exceedingly beautiful maiden, most chaste, and illustrious in wealth, lineage, and learning. By her steadfast understanding, she utterly vanquished the passionate and unbridled soul of Maximinus, the tyrant of Alexandria; and by her eloquence, she stopped the mouths of the so-called philosophers who had been gathered to dispute with her. She was crowned with the crown of martyrdom in the year 305. Her holy relics were taken by Angels to the holy mountain of Sinai, where they were discovered many years later; the famous monastery of Saint Katherine was originally dedicated to the Holy Transfiguration of the Lord and the Burning Bush, but later was dedicated to Saint Catherine. According to the ancient usage, Saints Katherine and Mercurius were celebrated on the 24th of this month, whereas the holy Hieromartyrs Clement of Rome and Peter of Alexandria were celebrated on the 25th. The dates of the feasts of these Saints were interchanged at the request of the Church and Monastery of Mount Sinai, so that the festival of Saint Katherine, their patron, might be celebrated more festively together with the Apodosis of the Feast of the Entry of the Theotokos. The Slavic Churches, however, commemorate these Saints on their original dates.

Apolytikion in the Plagal of the First Tone

Let us praise the most auspicious bride of Christ, the divine Katherine, protectress of Sinai, our aid and our help. For, she brilliantly silenced the eloquence of the impious by the sword of the spirit, and now, crowned as a martyr, she asks great mercy for all.

Kontakion in the Second Tone

O friends of martyrs, now divinely raise up a renewed chorus, praising the all-wise Katherine. For, she proclaimed Christ in the arena, trampled on the serpent, and spat upon the knowledge of the orators.