The mission of the AHEPA Family is to promote Hellenism, Education, Philanthropy, Civic Responsibility, and Family and Individual Excellence.

The Peter N. Derzis Chapter was organized and received its charter on May 4, 1969. Originally designated as the Arlington Virginia Chapter, the name was soon changed to honor Past Supreme President Peter N. Derzis, who was a chapter member and instrumental in its organization. In our short history, we have been honored with eight Chapter of the Year Awards and we’ve spawned many district and national AHEPA leaders, including seven District Governors, a Supreme President, a Supreme Treasurer, two Supreme Governors, a Supreme Counselor, a member of the Board of Directors, a national Controller and two national Auditors. Chapter membership currently stands at over 200...and we were the fifth largest Chapter in the country last year.

From the outset, our Chapter became intimately involved in numerous activities within the Community, the support of educational activities being principal among them. We became a charter sponsor of the Washington, DC Metropolitan Scholarship Program 40 years ago. This organization, composed of AHEPA and Daughters of Penelope chapters in the Washington Metropolitan area, has recognized many hundreds of worthy students with scholarship awards over the years. In that time, about 1,400 area students have been awarded over $700,000 since its inception. Another scholarship initiative was established in 1998, when our Chapter established a perpetual national scholarship award in memory of Peter Derzis. More recently, the Chapter established a $1,500 Community Scholarship awarded to a student within the local community who best exemplifies attributes of scholarship and community involvement. 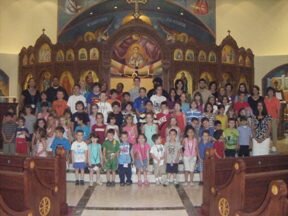 The Chapter also funds and presents the award of certificates and Greek School medals in recognition of academic excellence annually. In 2003, the Chapter sponsored the establishment of the Vacation Bible Camp program at St. Katherine Greek Orthodox Church and has remained an ardent supporter to this day. In 2007, the Chapter co-sponsored the first annual Hellenic American Career fair along with our friends at the American Hellenic Institute to help our community’s young adults learn firsthand about various occupations and job skills in order to make more informed decisions regarding their college and employment options. In 2008, the Chapter became a proud sponsor of the newly established Paideia Bilingual Preschool and Nursery at Saint Katherine Greek Orthodox Church.

Devotion to the local religious community has also been a hallmark of the chapter’s charitable enterprises. We were proud 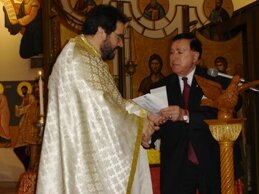 to donate the new cross atop Saint Katherine and we’ve donated well in excess of $125,000 to St. Katherine Greek Orthodox Church and have supported the establishment of several other churches in the local area including most recently donations in excess of $10,000 to the new Loudoun County Greek Orthodox church. Ongoing projects include establishment of an AHEPA Retirement Home and a series of non-partisan Town Hall Meetings designed to establish a dialogue with local and national political leaders. Our informative computer seminar programs are quite popular within the community. We are also very proud to be one of several sponsors of the Support the Troops program in our community. To date, over 6,000 pounds of personal comfort items have been sent to our troops in combat zones!

The Chapter has figured prominently on the national AHEPA scene as well, sponsoring many charitable events in support of such charities as St. Basil’s Academy, Tournament of Roses Parade, Earthquake Relief Fund for Greece, and the Katrina Relief Fund. During the recent wild fires in Greece, our Chapter mobilized immediately and donated over 2,000 pounds of goods to the relief effort – a sum which constituted 12.5% of the overall national totals. More recently, we have donated to relief for the victims of earthquakes in Haiti, Peru and Japan.

Additionally, the Chapter has been at the forefront of such programs as the AHEPA Has Heart Defibrillator Program, the National Heart Association’s Family and Friends CPR training program. More recently, one of our younger members conceived and championed the concept of an AHEPAcademy designed to identify, educate, inspire, mentor, advance, and network exceptional Greek-American high school students as they progress through their high school, college, graduate and professional careers. This national program is now serving our youth all over our country . 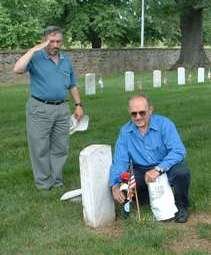 Each year, on Memorial Day, and in conjunction with our brothers from other local AHEPA Chapters, we gather to honor Hellenic American war dead at Arlington National Cemetery by placing American Flags and flowers on their graves.

The Chapter has supported missions outreach programs in Mexico and Guatamala and materially assisted orphanages in both those countries. Our Chapter members are principle movers of this activity within our community. For many years, we have worked at local homeless shelters in kitchens feeding the poor. In collaboration with our sisters from the Daughters of Penelope Helle Chapter 283, we’ve sponsored College Planning seminars, Heart Health Awareness events and provided the community with timely education on the rising identity theft crisis. 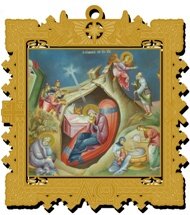 As a means of supporting our charitable endeavors, the Chapter supports three fund raising activities each year: a charity raffle, sale of Christmas ornaments, and the AHEPA Metro Golf Classic.  All proceeds go toward our designated AHEPA charities. We are extremely grateful to the many generous benefactors throughout our community and to the many volunteers whose selfless dedication and devotion make our philanthropy possible.

Pride and excellence are two words most often associated with our Chapter and our efforts on behalf of our fellow man. The members of the Peter N. Derzis Chapter 438 look confidently toward the future, but we remain ever mindful our past accomplishments only serve as stepping stones to future excellence.

AHEPANS are passionate about community service and involvement...won't you join us?